It's official: PayPal's app is now available on all major mobile platform with the announcement this week that it has expanded to the Blackberry operating system.

PayPal announced the expansion on their blog , lauding it as another opportunity to give their customers choice while also providing a uniformly positive payment experiance, no matter what device one is holding. 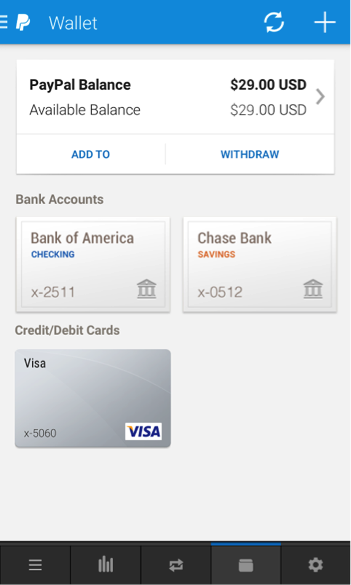 The New PayPal Interface On BlackBerry

"But no matter what smartphone you’re using, you're probably looking for an easier and more secure way to shop and pay. The good news is we understand this. That’s why we’re excited today to introduce the PayPal app for BlackBerry in the United States, United Kingdom and Australia, with more markets to come in the future. The app is now compatible with the BlackBerry Q10, BlackBerry Z10, and the new BlackBerry Classic smartphone. What’s even cooler? With this announcement you can now use the PayPal app on all major mobile platforms, including Android™, iOS®, Windows® Phone, Fire OS™ and of course BlackBerry."

The new app will allow PayPal BlackBerry users do things such as quickly send and request money, check balances and see recent activity while on the go.  As with the company's service on other platforms, the BlackBerry edition will also allow users to locate and redeem offers at participating businesses and check-in to pay at places that accept PayPal.

Banks, corporates and even regulators now recognize the imperative to modernize — not just digitize —the infrastructures and workflows that move money and data between businesses domestically and cross-border. Together with Visa, PYMNTS invites you to a month-long series of livestreamed programs on these issues as they reshape B2B payments. Masters of modernization share insights and answer questions during a mix of intimate fireside chats and vibrant virtual roundtables.

Mastercard Aims To Clear Up Transaction Confusion on Digital Statements

Why Millennials And Gen Z Could Save 2020's Holiday Shopping Season

Amazon One Lets Consumers Pay With Their Hand

ACI Worldwide, Mastercard Join Together To Ramp Up Real-Time Payments